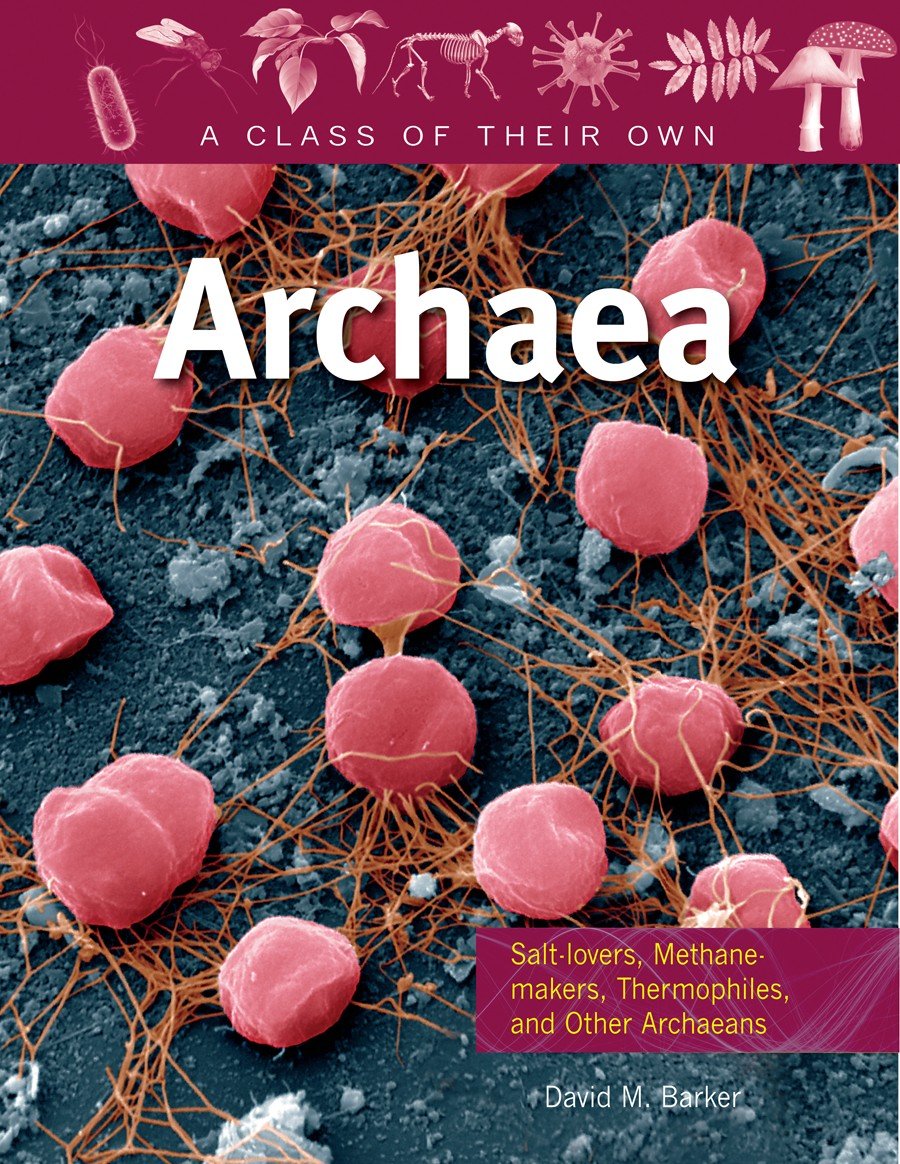 Archaea: Salt-Lovers, Methane-Makers, Thermophiles, and Other Archaeans (Class of Their Own (Paperback))

The archaea have ancient origin, just like the bacteria, but they are somewhat more advanced in certain features. A chief example of these features is that the circular DNA molecule is associated with DNA binding proteins.

Bacteria as you recall lack DNA binding proteins. So archaea are somewhere between bacteria and eukaryotes in this regard. These organisms have had a long time to evolve and diversify into cells with a wide range of forms and functions.

The archaea can be categorized as being extremophiles, meaning that they are found today in some of the most extreme environments on earth. They live in water that is 90°C (nearly boiling), -4°C (nearly freezing) pH 2 (highly acidic), 25M (very salty), or anaerobic conditions…and often in places with a combination of these characteristics!

Archaea evolved many cell sizes, but all are relatively small. The thermoplasmas are the smallest of the archaea. Most archaea fall into size classes (0.1 to 15 μ diameter and up to 200 μ long) matching bacteria. So they are about the size of a mitochondrion in a eukaryotic cell.

Archaea have also evolved into many cell shapes similar to those of bacteria. There are bacilli, cocci, spirilli, and plate-like forms of archaea.

Also like bacteria, the cells of archaea form various associations within a population of cells. Some species are unicellular, others are colonial, and yet others are filamentous.

After cell division, the growth of archaeans is like that of bacteria. The cells can double in volume in the 20 minutes between cell divisions. Since the division cycles for archaeans can be 20 minutes apart in ideal conditions, they could take over the earth quickly if conditions would remain ideal.

For archaeans, the ideal conditions are pretty extreme, so obviously they are no threat to the other species on our planet. These are ancient organisms, however, so their continued growth has been sustained in extreme environments for billions of years.

Kingdom Archaea can be divided into two major phyla:

The Euarchaeota phylum contains those archaea that are halophilic (Halobacteriales) meaning that they live in very concentrated salt solutions…brine.

Phylum Euarchaeota also includes methanogens (Methanogenales). These anaerobic archaea convert carbon dioxide and hydrogen to methane (CH4), known as swamp gas or natural gas. Some of these organisms use a fluorescent pigment for energy to drive this reaction. Some of these species indeed live in swamps, marshes, and landfills. Others live in the gut of ruminant animals who then belch quantities of methane into the atmosphere.

Other species in this group are autotrophic, converting sulfates in the geothermal features to hydrogen sulfide gas . Some of archaea in these groups live near hydrothermal vents…and convert methane gas backwards into lactate, and then from there to hydrogen gas and carbon dioxide.

The second phylum of Kingdom Archaea is Crenarchaeota. Most of the organisms in this phylum are also thermophilic, but also most are acidophilic. So they live in very acidic hot water environments. This would be corrosive conditions.

In the absence of oxygen, heterotrophic crenarchaeotes use organic molecules and sulfur to make carbon dioxide and hydrogen sulfide gas.  These same crenarchaeotes in the presence of oxygen will process organic molecules by running the TCA cycle backwards to convert sulfur and oxygen into sulfuric acid (H2SO4), otherwise known as battery acid. Obviously these are some organisms that can live in and help maintain some extreme environments.

Archaeans may be the only organisms that can live in extreme habitats such as thermal vents or hypersaline water. They may be extremely abundant in environments that are hostile to all other life forms. However, archaeans are not restricted to extreme environments; new research is showing that archaeans are also quite abundant in the plankton of the open sea. Much is still to be learned about these microbes, but it is clear that the Archaea is a remarkably diverse and successful kingdom of organisms.