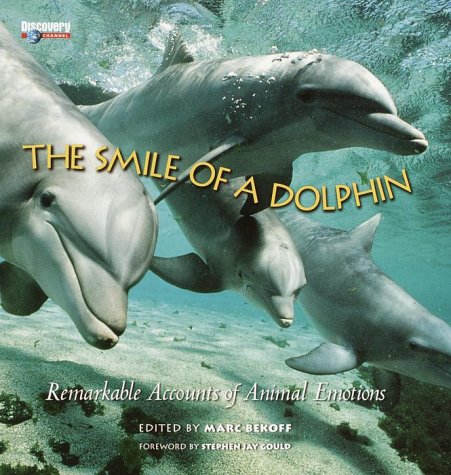 The Smile Of A Dolphin: Remarkable Accounts Of Animal Emotions

Pure tones can take the form of whistles , chirps and screams.Scientists refer to these as ‘frequently modulated sounds’, which means that the pitch of the sound changes with time – rising and falling.

Scientists  have leaned that dolphins are amazing vocal mimics – able to reproduce manmade whistle structures with precise accuracy. Dolphins produce whistles during social situations, when separated from friends, when excited, when happy and when panicked.

Scientists have discovered that family groups appear to reliably produce distinct categories of whistles and other calls that are stable across time, and that appear to be taught to new members of the group. These calls are so distinct that researchers are able to distinguish different family groups just by listening to their calls.

It should be noted however that there are a number of dolphin species which do not in fact produce any whistles whatsoever. These species are thought to communicate vocally using only pulsed sounds,

Unlike whistles, pulsed sounds are brief sounds (called clicks) that occur in rapid succession at regular intervals. A series of clicks together is called a ‘click train’. By listening to the information coming back in the click echoes, dolphins can get a mental image of objects in their environment.

Burst pulses occur when dolphins release clicks so rapidly that it is not believed that they are able to gain any sonar information from the returning click echoes.Dolphins of many species release bursts pulses when they are excited or angry, and burst pulses are thought to convey information about a dolphin’s emotional state.

Burst pulses can be extremely loud, and dolphins may use them during aggressive encounters – possibly to hurt the ‘ears’ of other dolphins. Burst pulse sounds are often seen in social situation where males are herding female dolphins, where burst pulses are directed at the genital region of the fleeing females. They have also been observed when a mother emits a loud burst pulses directed at a misbehaving calf.

Different kinds of burst pulse sounds used during aggressive encounters have been given names like ‘squawks’ and ‘barks’ – these click trains are often produced so rapidly that to the human ear, they sound like a continuous sounds, but in reality that are a series of tightly packed clicks.

Dolphins also produce a number of non-vocal sounds that they use for communication.

Tail slaps (or lob tailing): Dolphins often hit the surface of the water with their tail (flukes), producing a very loud booming sound that can transmit great distances in the water. Often a tailslap is a sign of aggression, but this need not always be the case. Tail slaps may mean many things in many situations – for example, a signal that it is time to leave the area. It may simply be a means of getting the attention of friends who are some distance away. Some dolphins and whales also slap their tails as a means of hunting fish – stunning the fish with a powerful blow.

Flipper slaps: Just like they would do with their tails, dolphins slap their flippers (that is, their pectoral fins) to sound. They may slap their flippers on the surface of the water, or onto their own body (e.g., their belly). This likely produces a similar effect to the tail slap.

Jaw claps and jaw pops: Dolphins can produce extremely loud sounds by rapidly clamping their jaws together. This behavior bangs their teeth together, producing an acoustic signal that transmits large distances. Jaw claps are generally understood to be an aggressive signal, used as a threat. But jaw clapping also occurs during play – the difference between real aggression and play aggression is often very subtle, just like in the case of humans.

Chuffs: Dolphins exhale rapidly, and you can often hear the sound of an exhaling dolphin if you happen to by nearby when they break the surface. Dolphins may also exhale rapidly through their blowhole as a communicative signal, producing a loud sound called a ‘chuff’ – a chuff is another signal thought to denote aggression.

Bubbles: Dolphins often blow bubble streams and bubble clouds in a variety of social situations, and while these are primarily visual signals, the production of a large bubble cloud also produces a distinctive noise that can likely be heard over short distances.

Body coloration, spots and stripes: Many species of dolphins have evolved complicated body markings that communicate information. For example, Atlantic spotted dolphins slowly develop spots as they age, with adult dolphins being covered in mottled spot patterns – this quickly conveys information about a dolphin’s age. Many color patterns – like counter-shading and the distinctive black and white markings of orcas – are likely used for camouflage or to help when hunting prey species. However, some of the markings also help species to quickly tell the difference between animals belonging to the same or different species.

Postures:  Dolphins produce a number of visual signals. They can signal other dolphins with body postures – for example, by forming their body into an S-shape posture they convey anger or aggression. Some scientists speculate that this S posture is in fact an imitation of the S shaped posture assumed by sharks – something that also conveys aggressions for sharks. So in essence, dolphins may be pretending to be an angry shark. During aggressive encounters, dolphins will also flare out their pec fins in an attempt to make themselves look larger, and open up their jaws – a threat signal.

Gestures: Dolphins of course do not have arms or hands, and yet they produce a number of subtle movements that could be understood to be meaningful gestures. For example, a dolphin shaking its head back and forth rapidly, an open jaw, or dipping its head during a frontal approach is often a sign of aggressions. Looking or swimming away, as well as flinching may be a sign of submission.

Aerial Displays:  These displays can be viewed both from above and below the water, and may be used to convey information about the direction of travel, location of food or general excitement levels. They may also serve to reinforce social bonds, and may also be effective in herding fish. Some have speculated that impressive aerial displays may also occur during contests – where individuals try to out-do each other.

Object Carrying: Males will collect objects and often swim out of the water holding the rocks or sticks in the air before slowly sinking back into the water. These object carrying displays may signal to the females that she has a hunky, strong male on her hands that is worth mating with.

One of the most important modes of signaling in a dolphin’s world is the use of touch. Dolphins have skin that is quite sensitive to even the lightest touch – much like the skins of human beings.

Dolphins are know to rub their bodies up against each other, but also to engage in intricate rubbing behaviors using the pectoral fins. Dolphins will rub their fins into the fins of other dolphins, engaging in a behavior that looks a lot like holding hands. They will also rub the bodies of their friends, moving their fins rapidly over the face, flank or genital region, producing what is likely to be a pleasurable sensation.