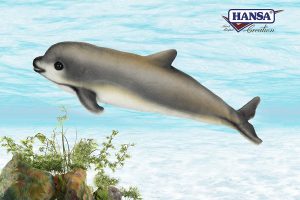 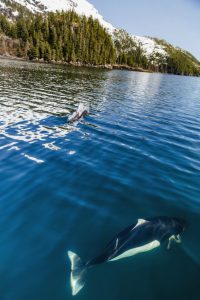 Dall’s porpoises occur throughout the North Pacific Ocean. This species is also found in the adjacent Bering Sea, Sea of Japan, and Okhotsk Sea.

Dall’s porpoises are “high strung,” fast swimming members of the porpoise family and are common in the North Pacific Ocean. They can reach a maximum length of just under 8 feet (2.4 m) and weigh up to 480 pounds (220 kg). Males are slightly larger and thicker than females, which reach lengths of just under 7 feet (2.1 m) long.

Dall’s porpoises have a relatively small, triangular head with little or no beak and a thick, robust body. The flippers are small, round, and located forward on the body. The dorsal fin is positioned in the middle of the back, triangular in shape, and often cant, or angles, forward.

These porpoises are usually found in groups averaging between 2-20 individuals, but have been occasionally seen in larger, loosely associated groups in the hundreds or even thousands of animals. They are known to associate with Pacific white-sided dolphins and short-finned pilot whales. As rapid, gregarious swimmers, they are also attracted to fast moving vessels and commonly bowride.

They feed on small schooling fish (e.g., anchovies, herring, and hake), mid- and deep water fish (e.g., myctophids and smelts), cephalopods (e.g., squid and octopus), and occasionally crabs and shrimp. Feeding usually occurs at night when their prey vertically migrate up toward the surface.

Dall’s porpoises are capable of diving up to 1640 feet (500 m) in order to reach their prey. They have 38-56 very small spade-shaped teeth on each jaw that are useful for grasping. Their brisk surfacing while swimming creates a “rooster tail” of water spray that is a unique characteristic of the species.

Dall’s porpoises become sexually mature at 3.5-8 years of age and give birth to a single calf after 10-12 months, usually between June and September. The calves are generally 3.3 feet (1 m) long. Calves are typically nursed by their mother for less than one year. These cetaceans can live up to 22 years, but their lifespan is generally 15-20 years. 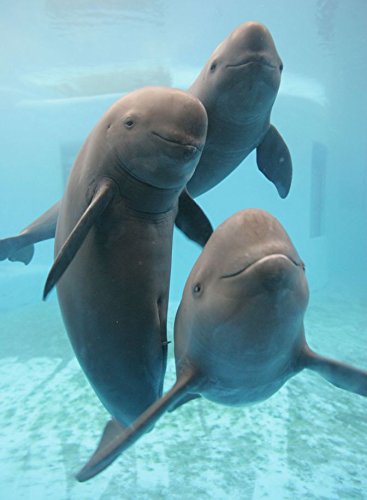 Finless porpoises are widely distributed in the coastal waters of Asia, from the Persian Gulf, east and north to Central Japan and as far south as the northern coast of Java and the Strait of Sunda. Finless porpoises are described as a coastal, estuarine or riverine species and they are usually sighted near the coast.

Finless porpoises are slender and have no dorsal fin. In its place along the mid-dorsum is a low dorsal ridge which is covered by thick  skin.

Newborn finless porpoises are mainly black with some grey on the dorsal ridge area. These young porpoises quickly become lighter and after 4 to 6 months attain the uniform light grey colour of adults.

Both male and female finless porpoises grow to lengths greater then 1.55 m. Although there is a great deal of variability between populations of finless porpoises, males become sexually mature at 4.5 – 9 years and females at 3-7 years.

Finless porpoises are opportunistic feeders, consuming a wide variety of fishes, shrimps and cephalopods throughout their range. 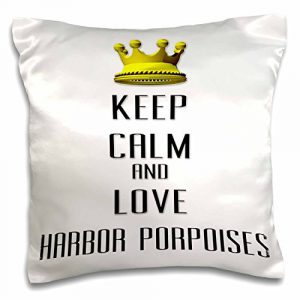 Harbour porpoises are found in the temperate waters of the northern hemisphere in a nearly circumpolar distribution. They generally inhabit coastal waters with a depth of less than 150 meters, and their common name is derived from their regular appearance in bays and harbours. Many populations of harbour porpoises are migratory.

The harbour porpoise is the most widespread, commonly seen and studied of all porpoises. They are very shy animals and only show their backs and dorsal fin when surfacing the water. One of the harbour porpoises names, the puffing pig, is derived from the noise of its blow when they surface the water for air. The noise makes sounds like a human sneezing or puffing.

Living in cool temperate waters the porpoise has a high metabolic rate, therefore the less choosy they are with their diet, the more successful they will be finding a meal.  Their diet consists of over 20 different species of fish, squid, octopus and shellfish.  Herring, sprat and sandeels make up a large part of the diet among porpoises around the Isle of Mull and the small Isles.  They hunt singly or in small groups, usually including 2 to 10 individuals.  They are quite accomplished divers and when feeding may surface to breathe about four times every 10 to 20 seconds before diving for up to six minutes.  They can reach depths of over 230 metres.

Of all cetaceans they have the shortest lifespan.  Capable of reaching up to 20 years, but rarely do, the average life is around ten.  Sexual maturity is reached at three to four years with females gestating for approximately 11 months.  Only one calf is born annually, which means the porpoises reproductive life is extremely short.  Calves are born at around 70 centrimetres long and have a strong bond with their mother.  Males play no part in the upbringing of the offspring.  Weaning can ocur quickly and individuals as young as six months have been known to become independent.  With such a short lifespan and reproductive life harbour porpoises are highly susceptible to sudden decreases in local populations.